I just got back from a most epic adventure in Italy. After an eye opening work trip visiting winemakers I rep from Tuscany and Piedmont, I got in touch with some of the guys from the "Tenkara Italy" facebook group and rented a car in Milan. 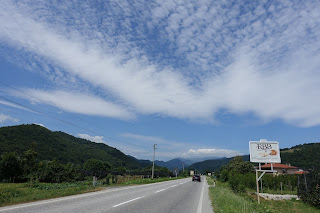 After a 2-3 hour drive, I arrived in small mountain town called Frassino, to stay at a small B&B in town called Barba Bertu. And "the beard" was a funny guy. A real character! 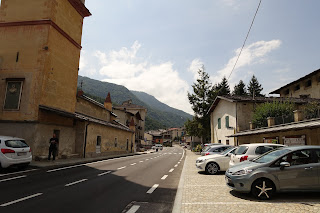 Paolo and Roberto met me soon after I arrived and we went looking for some clear water. There had been some issues with a dam (or diga) in Italian, and it took a few tries before we found clearer water. 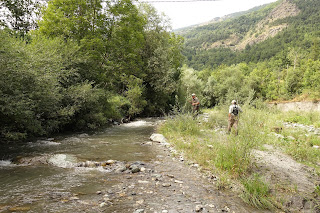 The water temps were pretty perfect - 60 degrees on the dot. We were all soon into some fish. 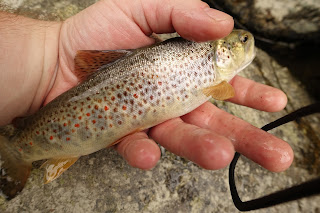 I was pretty overwhelmed after having visiting all the wineries the previous week, having to stay out late and wake up really early, walk around in the 100 plus degree weather... needless to say I was VERY happy to be in the cool, refreshing mountain air. 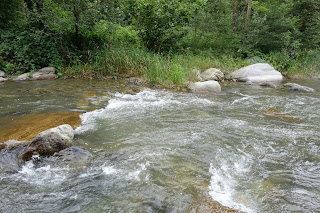 The river Varaita is a "big" small stream and is textbook-perfect for happy trout. Free-stoned, winding and cascading down the valley, it provides ideal lies for trout left and right. I was having fun picking the river apart. I was also having trouble getting good hook sets and landing fish. But plenty of fish went for my fly, some even too small to swallow it. 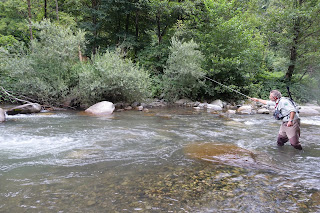 Make no mistake, there were fish everywhere. Here Paolo drifts through the slow water on the far side of the current - unlike Brookies back home, the browns here like the slowest water more often. 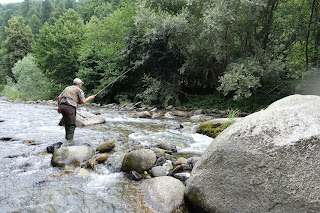 Roberto fishes an Eddy, above, between two rocks. A likely lie for some brown trout. 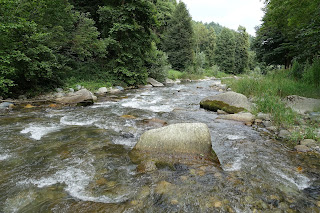 I soaked it all in, catching only a few fish on the first afternoon. We were fishing the "No Kill" section of the river and Paolo kindly reminded me that these fish are not stupid, making me feel a bit better. 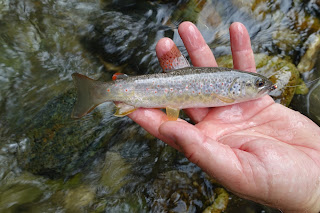 There was a healthy mix of wild Mediterranean brown trout, above, and the atlantic variety, below. The way to tell is to look for the signature distinct white circles around the red dots. The atlantic trout do not have that. Additionally, there is a white stripe on the fins of the mediterranean trout that I did not see on the Atlantic trout that I caught. 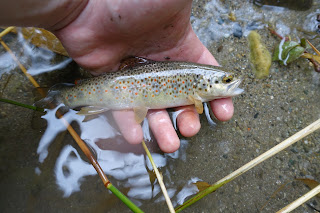 I took my time picking apart pockets, but Roberto kept me on task, signaling for me to move up when I wasn't paying attention. 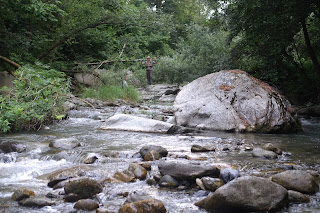 There were plenty of tough casting locations, and as usual I employed many slingshot casts. The same flies that work for me here at home worked in the river Varaita as well. But there was something about red and orange that really made the fish bite, it was undeniable as I switched back and forth to test Paolo's advice. His small red nymph was insanely successful. 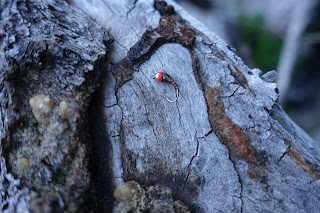 I will try to create a kebari pattern that uses those same elements to try here, although the color may have been more important there then it ever would be here. I used precise slingshot casts to get under these branches where I hooked and lost a nice fish. 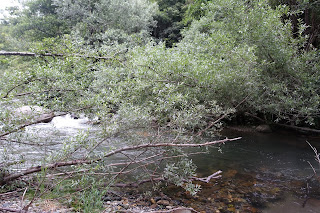 At a particularly nice pool we switched to Valsesiana style dry flies, tied by Paolo. He gave me a few after I had given some of mine to him and Roberto upon arrival. Paolo's red Valsesiana "dry" flies (nothing like our catskill classic dries in the states) worked like a charm. 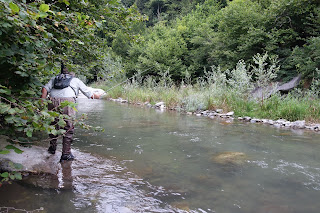 Paolo releasing his first fish from this pool. I also had one on the line soon after. 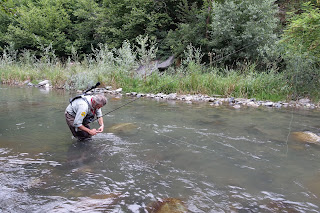 Roberto left early to head home, where he was preparing some dinner for us all. What a pleasure to be hosted by and to learn from these gentlemen. 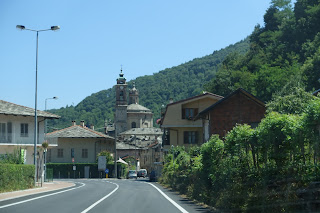 After we finished a delicious dinner, Paolo sat down to show me how to hand tie an Italian Valsesiana fly. I watched him do it a few times and then gave it a try. He used silk thread from his grandmother, breaking it down into thinner strands to use separately for each fly. The hackle was different than Tenkara Kebari hackle... intentionally longer, applied to the hook in a unique way, and from wider and less sleek feathers. This particular pattern was a bit of a dry fly pattern. But after a few casts, the fly would sink just a tiny bit and become a pretty perfect emerger. 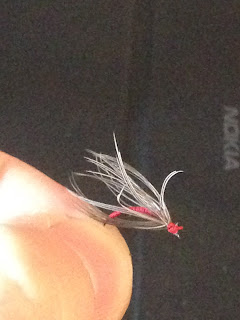 This fly was the one I would be using for the next day in the mountains. I would soon find out just how insanely effective it would be. Originally I had still just thought it was another sakasa kebari. 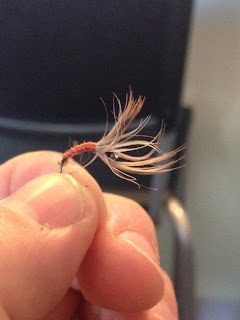 I tied one of my own using partridge. I took all these photos recently, long after the flies were used heavily in Italy. The hackle was not really as dramatically "forward" or rear facing as it looks in these photos. It was sort of "neutral" when it came to the direction it pointed in. After fishing the flies, they settled in one way or another naturally. I should have thought to take some "before" photos, but alas, I did not. This is one I tied by hand after Paolo showed me the technique. Again, used in this photo. 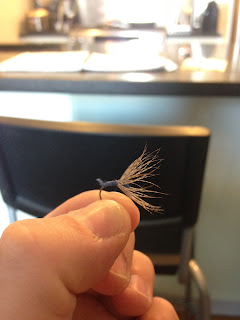 I'll be looking forward to ordering the appropriate materials and trying to make some more in the coming weeks. The simplicity of these flies just made me giddy, especially when I found them to work back home just this weekend. Meanwhile I'm still uploading photos and putting together some posts for the following days, stay tuned... The best views and most beautiful fish are definitely still yet to come!
Posted by Klags at Monday, August 03, 2015