It feels good to finally get settled out here in Colorado, starting a new chapter and chasing some dreams I've wanted to chase for a long time. Sharing more of the summer's adventures has been long overdue, and so why not jump in head first now with 240-ish miles of Backpacking and Tenkara along the John Muir Trail? This one is going to take a few posts, so here goes... 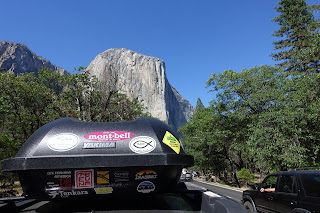 This part of the summer's adventures began in Yosemite - an iconic, over-crowded wonder of nature that draws tons of people who may or may not be able to comprehend or take advantage of what they are experiencing while there. Rob and I arrived during a massive wildfire that had, just 2 days before, coated the entire valley in smoke and created a heck of a lot of confusion about how we were going to begin our hike as planned. This ended up being helpful in the end, as we were able to do some things we may not have been able to do otherwise. 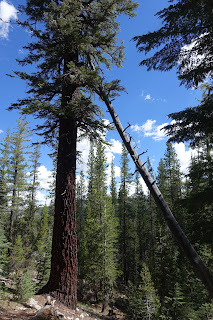 You see, the John Muir Trail requires permits, since it is just about the most scenic through-hike in the USA - depending on who you ask. We had not secured JMT permits, but we had secured PCT 500 mile permits for the Pacific Crest Trail, and we planned to hike the overlapping sections of PCT and JMT, and possibly beyond, if our schedule allowed. Given that this raging fire nearby had scared the majority of tourists away, we waltzed right in, and scored one of the most in-demand permits in the park, to hike the northbound JMT between Tuolomne Meadows and Happy Isles; which would take 3 days - before starting our PCT 500 southbound back at Tuolomne meadows, and going straight on to the Southern High Sierra from there. 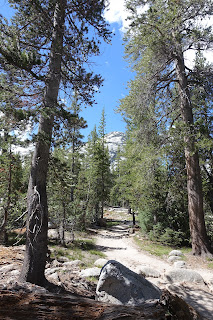 We spent a night in a car-camping site, and then set off the next day from Tuolomne Meadows, heading northbound on the JMT... which was, confusingly, actually taking us due South. Go figure. It was a monumentally exciting moment for me. I somehow felt that almost everything in my life had been leading up to this very moment... and all along while making these plans, I had presumed we wouldn't be able to get these permits, that the snow and melt out would keep us out, that a fire would get in our way... yet here we were! 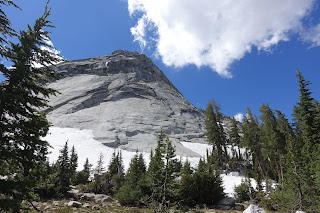 Almost immediately we were hiking through easily-recognizable features that were decidedly "Yosemite" in appearance. It was hard to believe that the moment had arrived. I felt overwhelmed... excited that things had gone as planned, excited about what lay ahead... but also apprehensive. I wondered to myself, would I be able to complete the trail? Do I have what it takes? Does a lifetime of backpacking short trips add up to the skill required to pull this off? Did I train hard enough and prepare well enough to finish the John Muir Trail and more? 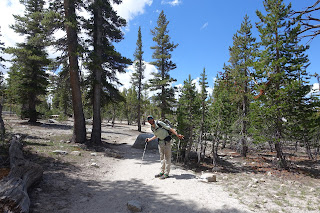 Soon those thoughts faded though, and I was focused on the scenery, my breathing, the mosquitos, and wondering where we would get a chance to catch our first trout on the trail. 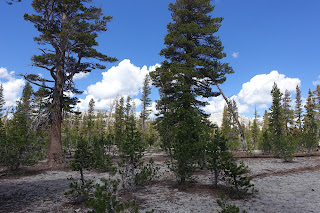 Did I mention it was hot? California is HOT. They always say "oh, its just dry heat, its not even that hot." THAT IS A LIE. Speaking of which, I cannot tell you how many things I heard about California that ended up being lies. Let's start with the "golden hills" thing... what... you mean the burned and dead brown hills? Sure. Don't get me wrong, I love California. But I think everyone has sold California as a bit of a lie to everyone else, just to get them to go there. No different today really, is it? California would benefit from just a little less heat, of that I am sure. 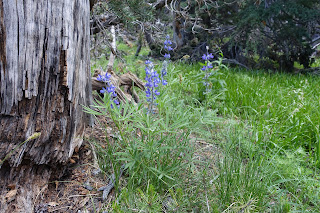 Which brings me to the next important joyful moment for me... A huge shadow had been cast over this hike for me by the knowledge that we were embarking on the JMT during the snowiest hiking year on record. 2 weeks before we began our trip, two women had died in water crossings. Others had died before that. One guy fell of Mt Whitney. It was kind of overwhelming. I didn't share any of this with my mother... 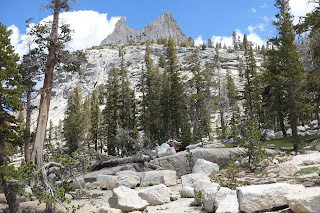 It was shaping up to be a deadly and challenging year along the PCT and JMT - reports of crazy-high water levels that made water crossings dangerous, icy/slippery snow-fields for miles on and below all of the major passes; and that wasn't counting the fires, which could still become a problem at any time. The joyful moment came when I realized that we were not surrounded by feet of snow, and that we might just end up pulling this thing off... 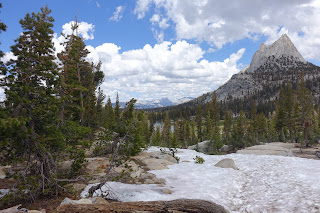 As we hiked towards our first pass, Cathedral Pass, we hit some pretty serious mosquitos and got our first taste of what was to come. Luckily I had worn my bug-stopper hoody and treated the rest of my clothes with Permethrin. This, along with a bug head-net essentially gave me full-body armor and I was not having a bad time with bugs whatsoever. Score! 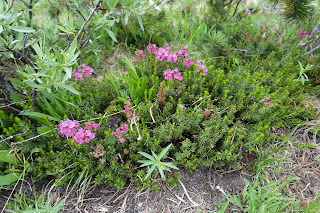 As we hiked, the views just got better and better. I took too many photos, but it was also always good to have an excuse to stop and take a deep breath. 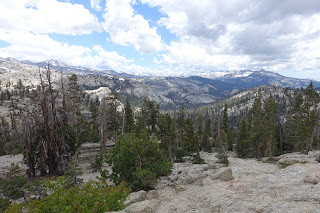 We soon discovered that the meadows held the worst mosquitos, and the whole area had just melted out... meaning they were hatching in full force. We encountered a group of college-age girls who were running at top speed; jumping, hollering, hooting and making a racket, they raced past us screaming about mosquitos and slapping their exposed skin repeatedly. Rob and I laughed, picking up the pace and hoping we wouldn't be hit as hard. 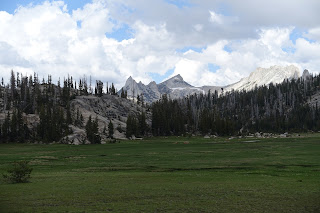 Taking a cue from the girls, and a tip from another hiker, we made plans to camp up higher near the pass itself, hopefully giving us some shelter from the swarms of hungry mosquitos. This tactic ended up working mostly as intended, and we set up camp without nearly as many bugs around as we had hiked through down below. 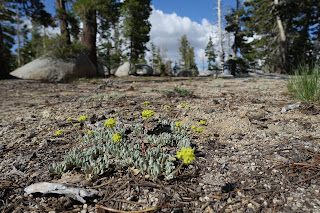 Another astonishing thing for me was the variety and overall quantity of beautiful flowers in every shape, size and color. The melting snow had created a booming year for all sources of life, but especially for the flowers. 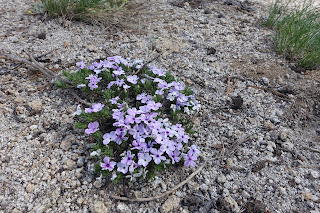 After setting up camp, it was time to go enjoy the views. Behind the ridge we were camped on was one of the most epic sunset views I had ever encountered, so we soaked in the experience as thoroughly as possible. 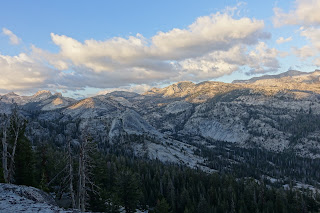 As I looked out into the mountains, I felt conflicting feelings of calm and chaos... on one side, there was the excitement of the adventure at hand. On the other, there was the gravity of the task at hand. I decided not to worry on this trip, and take it as it came... which was not an attitude that had really worked for me back in city life. That ended up being a good thing. 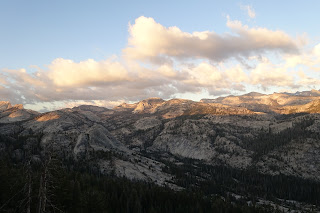 The light in these mountains is almost beyond words, and certainly beyond my amateur abilities as a hobby photographer with a less-than stellar camera to capture perfectly. I began to understand why Ansel Adams had chosen this mountain range as the subject of much of his life's work. It truly was magnificent. 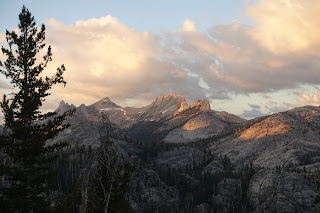 I slept reasonably well on that first night, and woke up to a beautiful morning, albeit full of mosquitos and a totally botched breakfast. But I soon recovered from the mediocre beginning of my day, and the surroundings re-set my mood in no time at all. 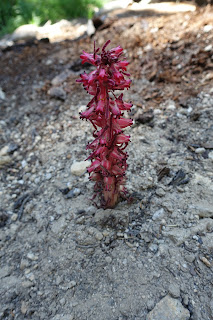 Again on day 2, I spent way too much time taking photos of flowers and other beautiful things I never wanted to forget. 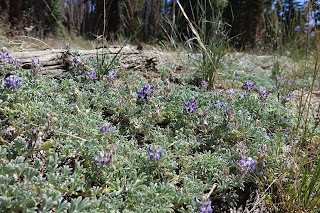 Some of the most unique and picturesque terrain was probably the burn areas left over from the infamous "Rim Fire" from just a few years back. A decent amount of the park burned, leaving fields of tall, blackened trees, which in turn created a severe lack of shade in the hot summer sun. 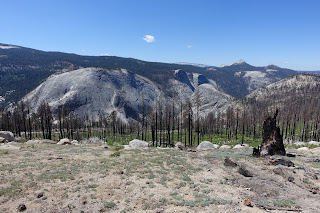 I reminded myself again that the hot summer sun was going to melt the snow, and therefore I should try not to be too mad at the heat. I also knew that this was a notoriously hot section of trail... and just the fact that we weren't hiking through clouds of smoke from the nearby forest fire kept me from being too bothered by anything negative at all. 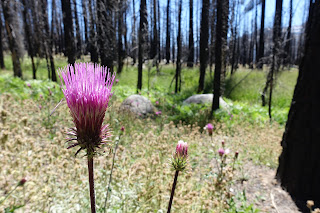 I found it difficult to photograph the flowers and the burned trees... which was disappointing because it made for some beautiful scenery. The scale of the trees being so large, while the flowers were so small definitely didn't make it easy. 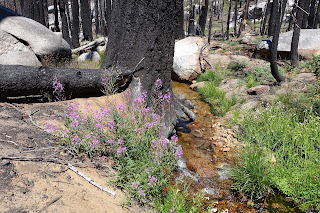 Somehow though, this burned section was immediately one of my favorite sections of the hike so far. It just left me with a kind of feeling that is hard to describe - one that had a long-lasting and memorable impact. 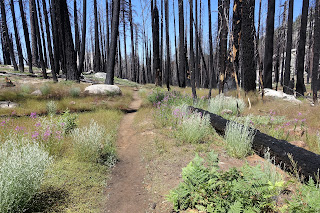 After descending a few more miles, we arrived at the Merced River and the backpacker's campsite. We set up camp and I went fishing, where I met a group of people, a couple of whom had just bought some cheap "tenkara rods" online. I spent some time teaching them how to use the rods, and we all caught some fish. While I was off fishing, Rob watched a rattle snake try to get into my tent, and he scared it off by tossing pebbles at it. The Japanese couple camped near us were rather intrigued by this apparently, and I wish that I had been there to see it all go down. 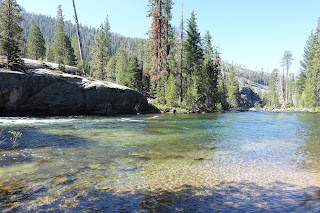 The next morning I said goodbye to my new friends, hoping that we'd meet up again along the trail when Rob and I looped back around to start hiking again from Tuolomne Meadows, heading Southbound. We set off towards Happy Isles, knowing we needed to arrive well before the only shuttle bus that could take us back to the car at the trailhead. 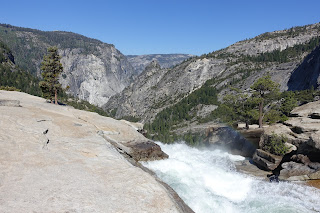 We hiked across and along Nevada falls, looking back at views of Half Dome and other features I don't know the names of. The waterfall was absolutely raging and the sound carried for miles. I'll never forget this view looking back at the falls from farther down the trail. 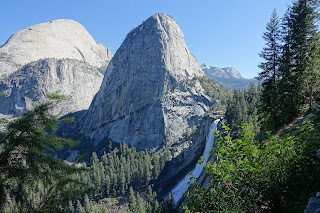 Another mile or so down the trail we hit the crowds, which felt strange after being on the trail for a few days. Hundreds of tourists were marching along paved "paths" towards the base of Nevada Falls... but most of them would never make it. I reflected on the complainers and whiners, the people in flip-flops or jeans toting over-stuffed purses and clutching cameras in the mid-day sun. I quickened my pace, slamming my hiking poles on the concrete to make noise and hoping that people would move out of the way for the hikers who were actually in good enough shape to cover more than a quarter of a mile before giving up. 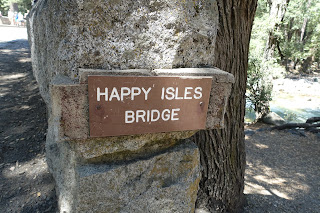 Soon we arrived at the Happy Isles Bridge, knowing we had completed the first section of our through hike. We ate too much food in Yosemite Valley, and then made the shuttle with time to spare. There were also no problems with grabbing our food and other stuff that we had left in the bear-boxes near the car, so we drove off to find a campsite for the night. Luck was on our side for now, and we ended up finding one of the most picturesque car-camping sites of the trip - which, coincidentally, had just opened for the season that very morning. 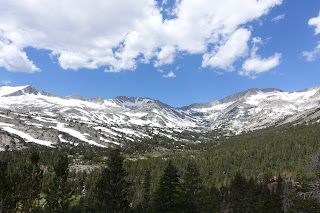 I slept really well that night, feeling accomplished and excited about what was to come in the following weeks on the trail... more on that soon!
Posted by Klags at Friday, November 17, 2017 3 comments: