Man is it cold in New York. I feel like we've been in this "deep freeze" forever. Walking the streets of Brooklyn, the usual construction, slush, and ice make for a depressing combo. Thankfully there's always someone to provide some comic relief just when you need it most... 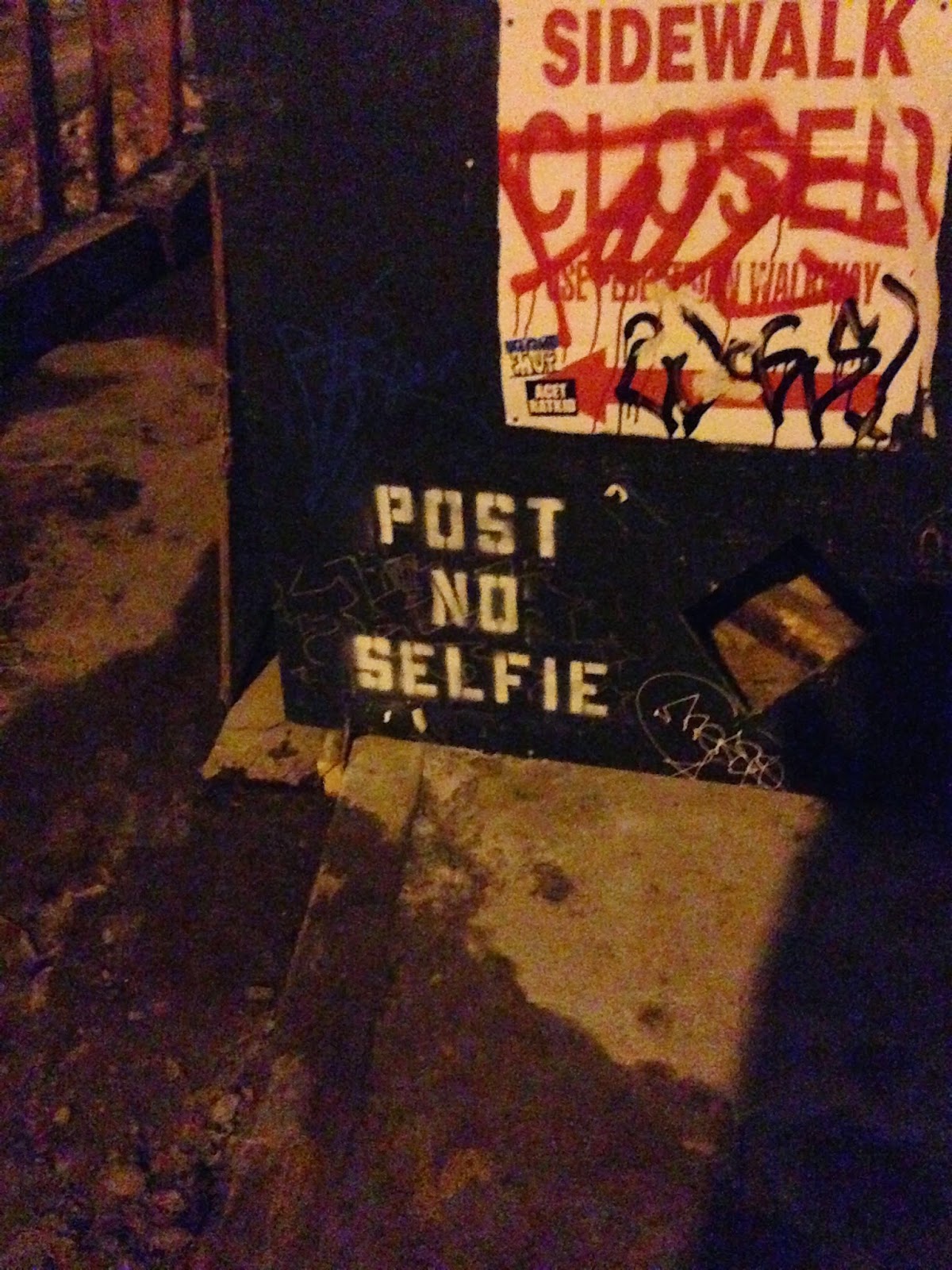 I'm really looking forward to escaping this cold and getting to Japan for some more typical Spring weather. Forecast calls for mid 40's and into the 50's for the next 10 days and I couldn't be happier, even if there is a bit of rain too. (Hopefully not too much!) 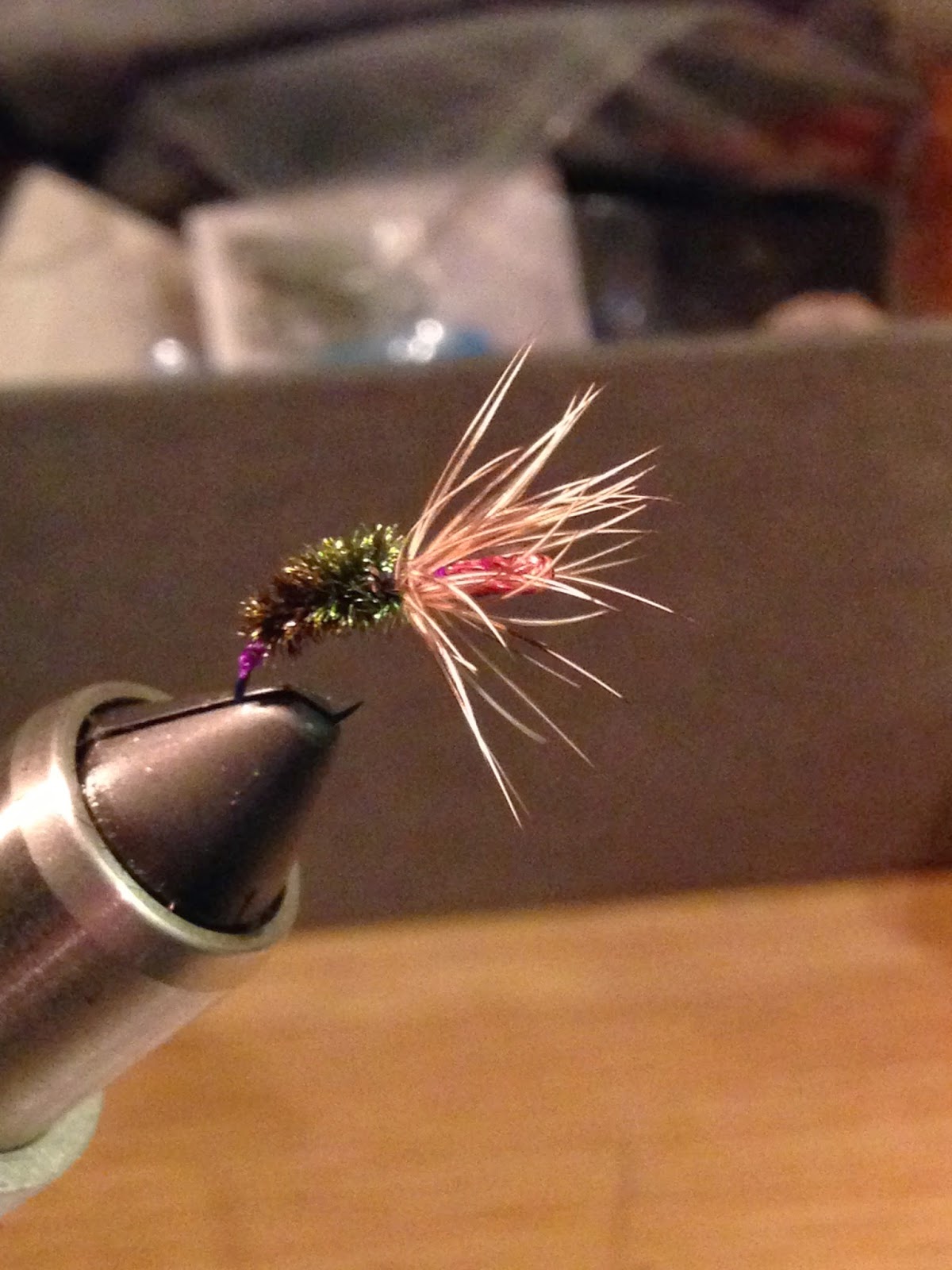 I've been using a lot of peacock herl for the most recent Kebaris I've been tying. This is mostly because I stumbled upon an amazing post, somewhere on Adam Trahan's forum - Tenkara-Fisher.com, and it linked me to a Japanese tyer's site:

This amazing site shows the local patterns by region, historically speaking, for Japanese fly fishing. Pretty cool. I urge you to take some time to look at this slightly old but VERY useful resource. Its amazing all the work this gentleman has done to research, re-create, photograph, and reference many flies from different regions in Japan.


I've been using mostly silk threads, purple seems popular. Hard to choose a color, but a few videos I watched suggested darker colors. The above fly was created by Shintaro Kumazaki, and was featured and named in a video made by Daniel Galhardo of Tenkara USA. This is a dry fly, unlike most of the others I've been tying here. 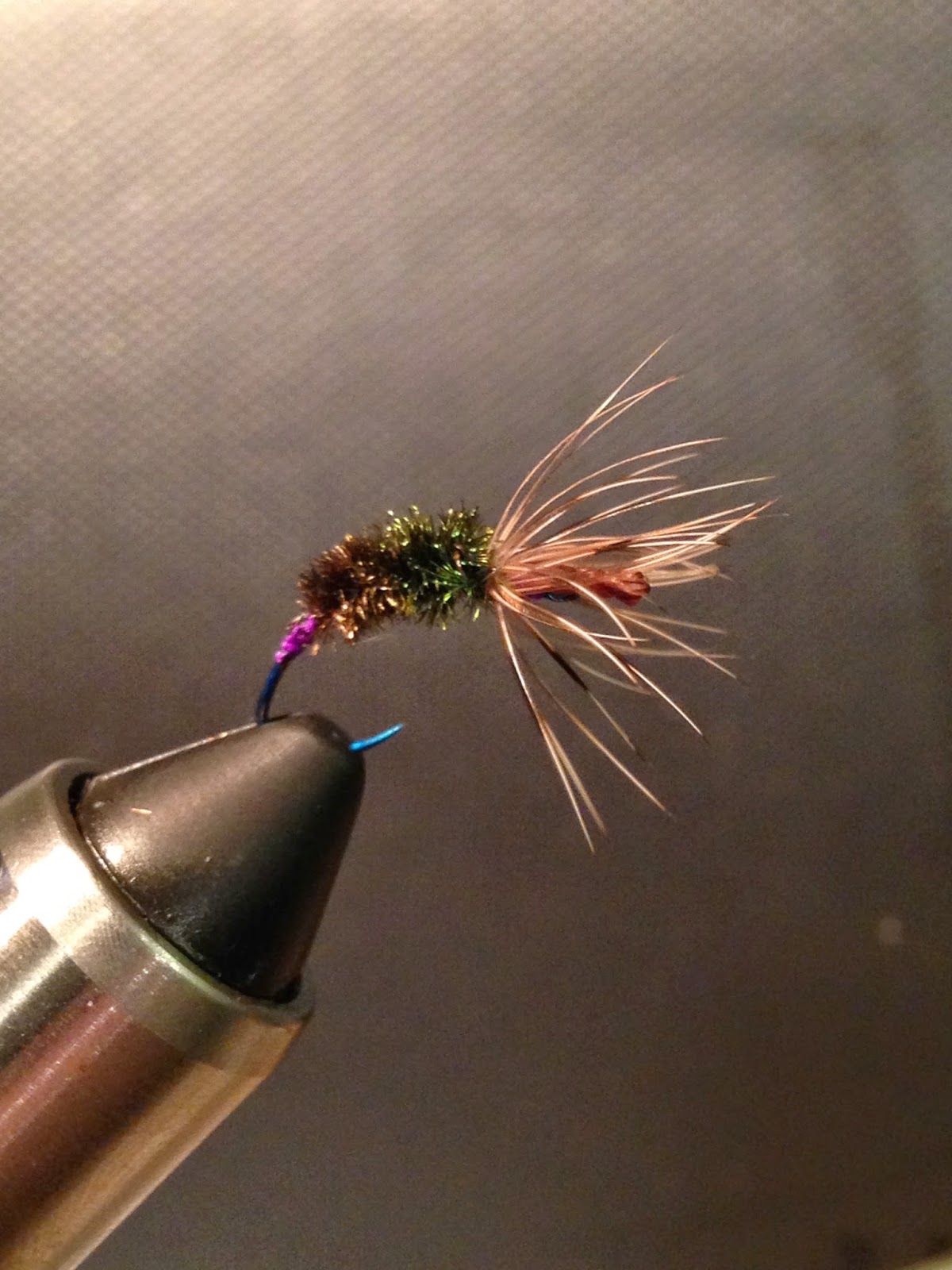 This version, above uses a Persimmon-dyed silk cord for an eye. Tied on a Gamakatsu eyeless hook I got from TenkaraBum. 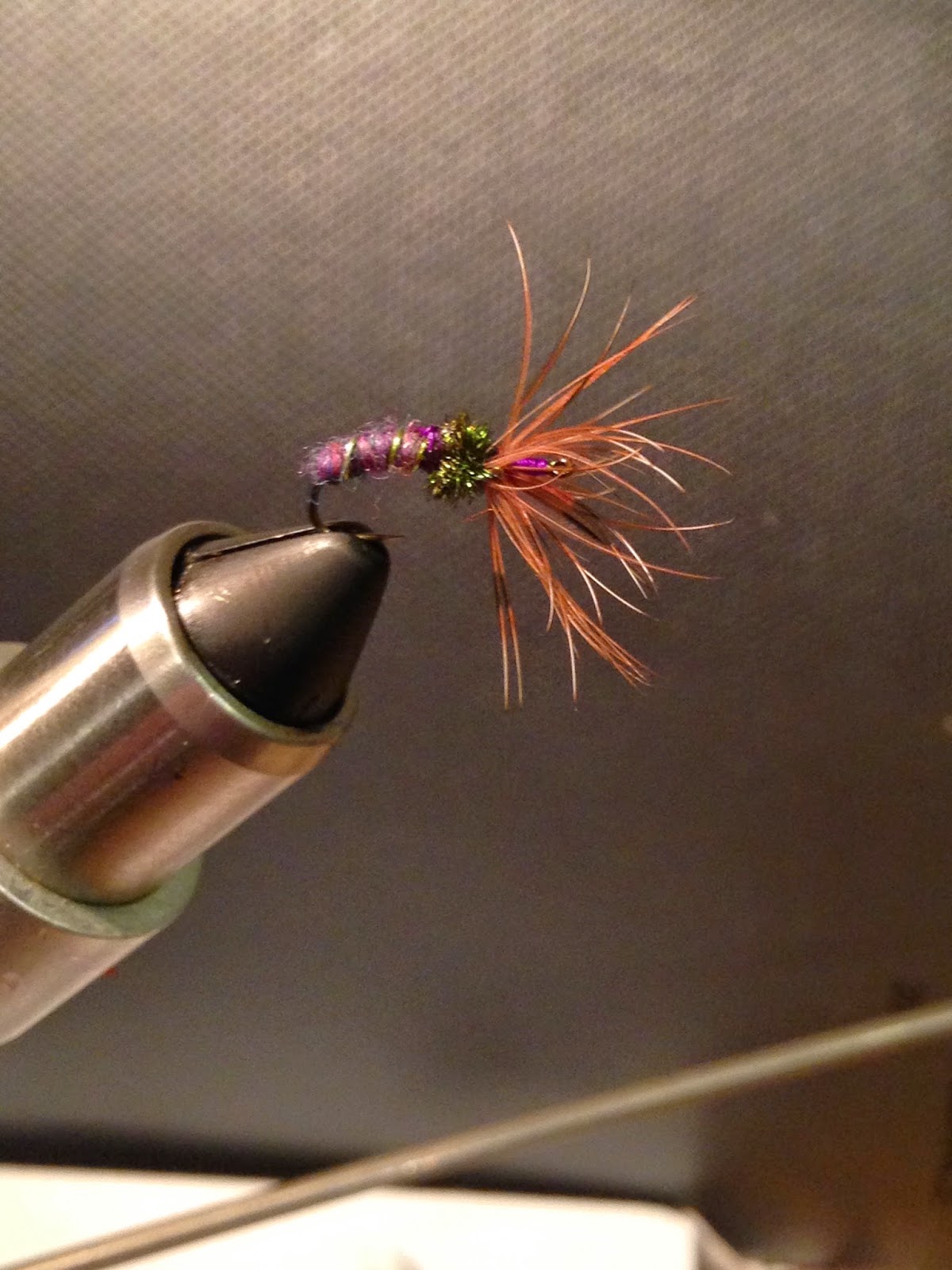 Here I tried using some striated yarn and more peacock herl, which also came from TenkaraBum 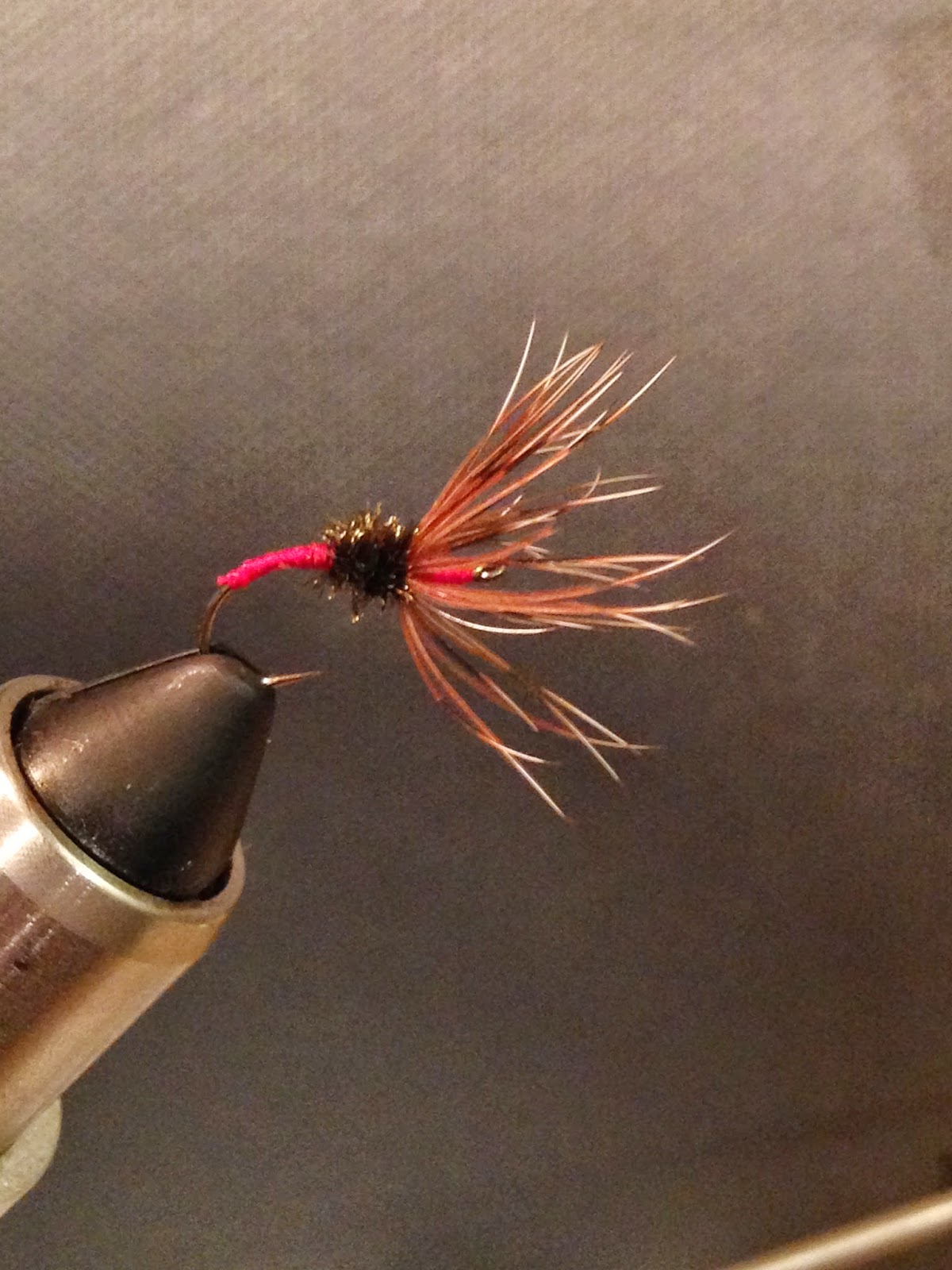 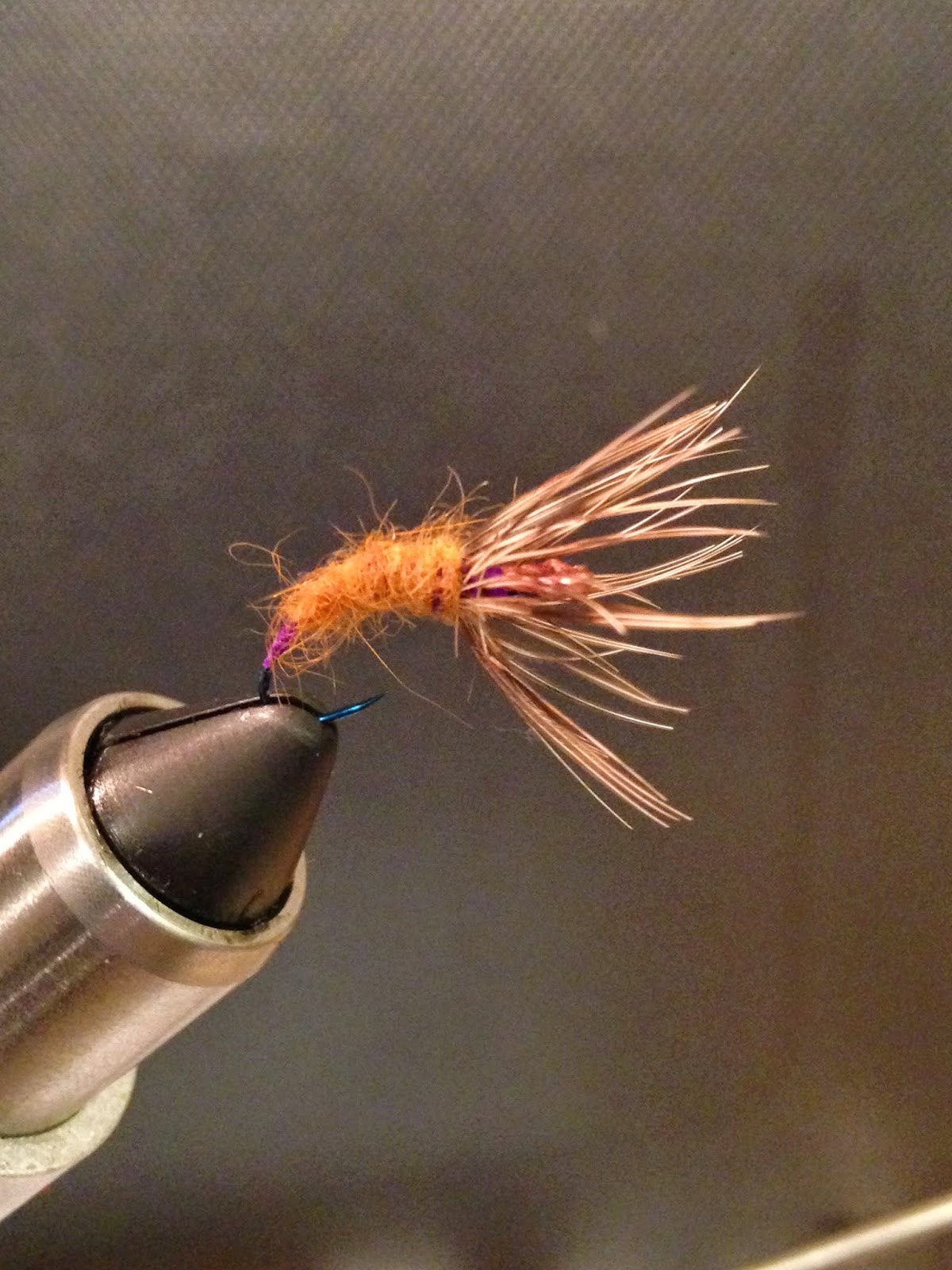 I'm a HUGE fan of Fran Betters' patterns, especially the "Ausable series." I spend too much time fishing in the Adirondacks, and I've come to trust and love his flies. The flies above and below are both tied with Fran Betters' orange-died Australian Opossum. Let's see how the japanese trout like it... the Brookies over here sure do. 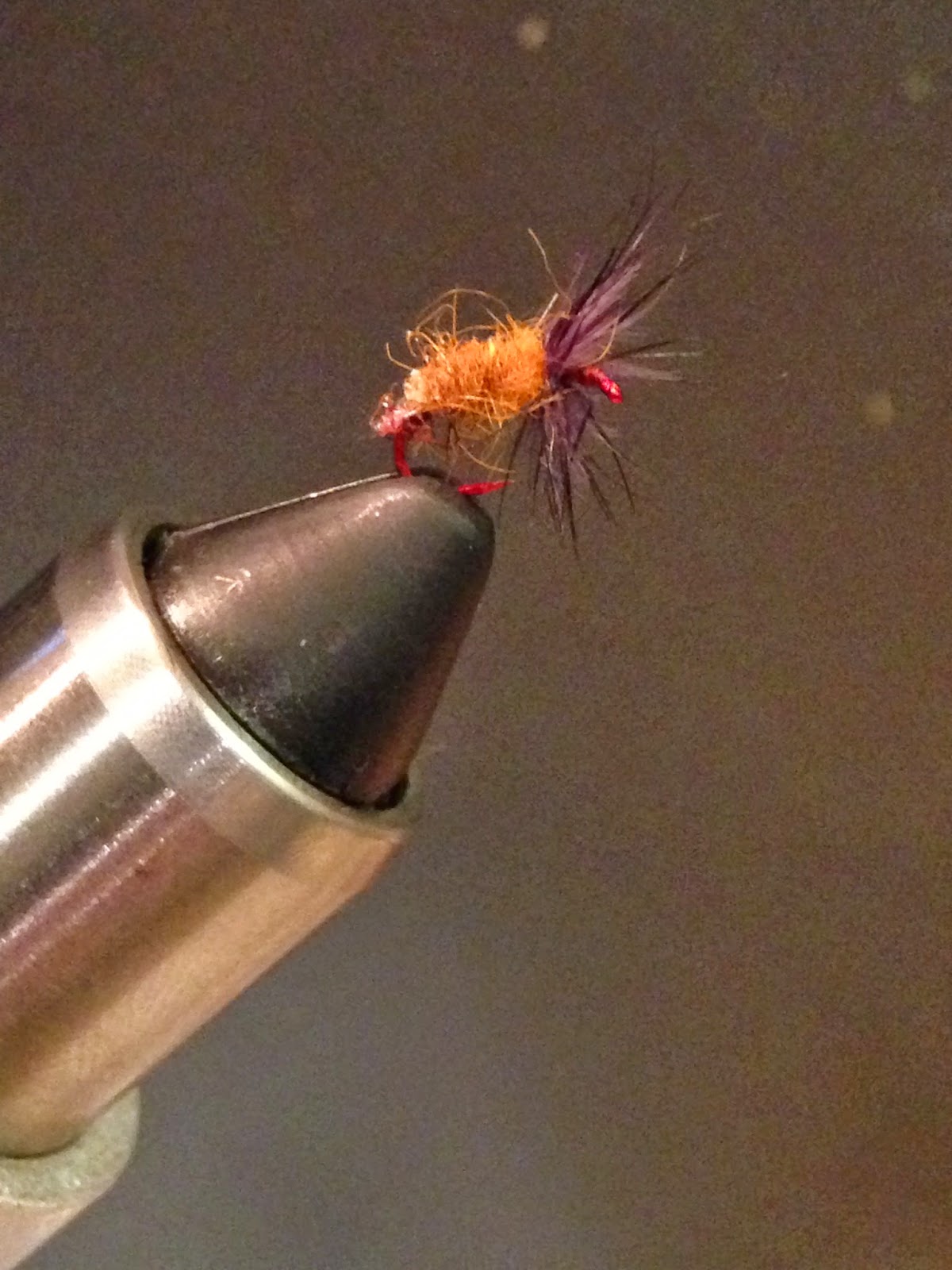 Much credit is due to Kiwi of American Sakasa Kebari Blog for turning me onto his "Ausable Kebari" and it got me into using this stuff for my Kebaris as well. 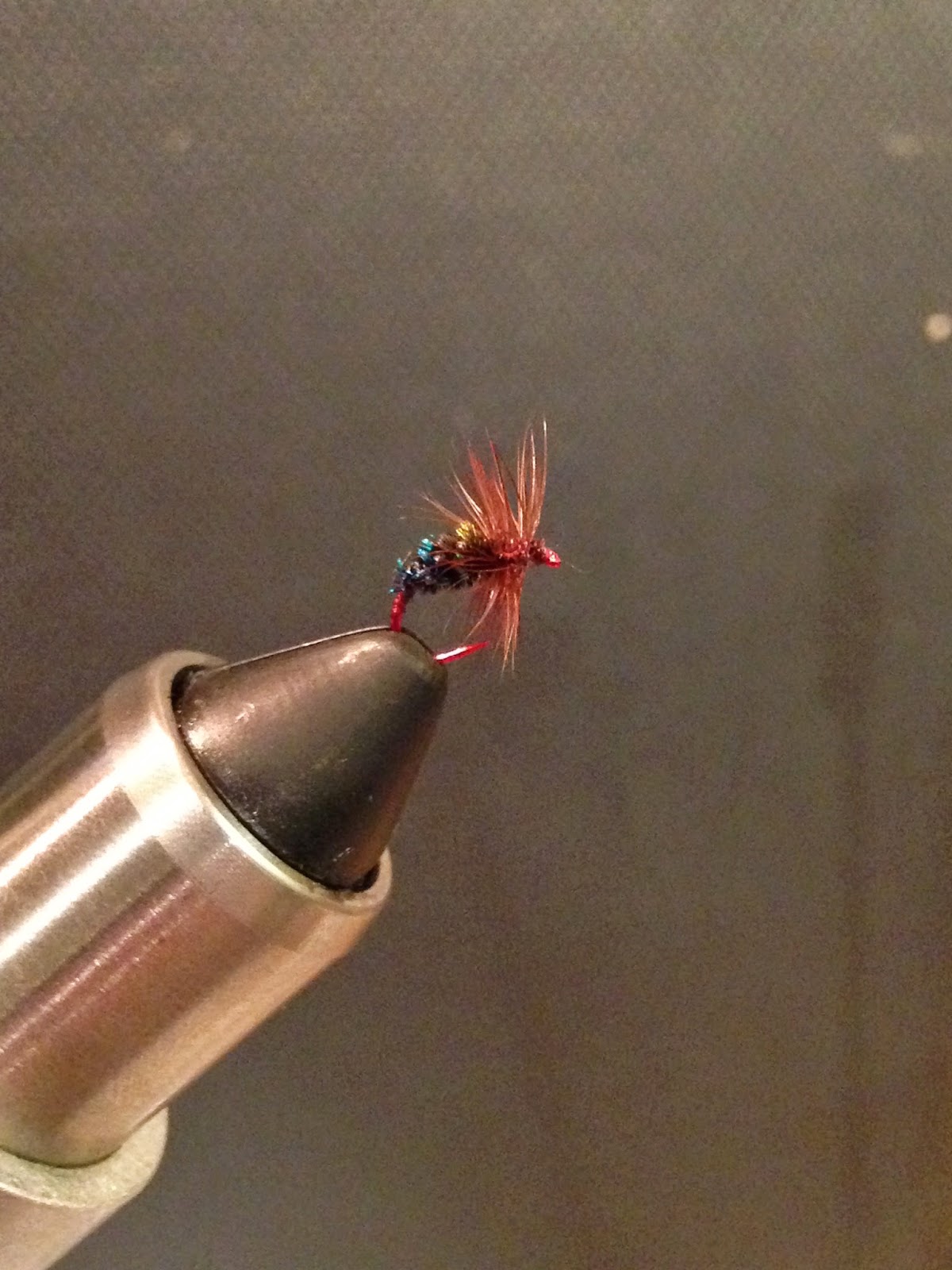 Here's a fly I took right from the Japanese site I linked to above. Given that I'll likely be fishing in the Tenkawa area instead of the original plan to hit Takayama area, I found some flies on the site and tied one up on a size 18 Gamakatsu barbless scud hook, readily available at a few fly shops I frequent (unlike most of the other hooks which I buy online.)

Hopefully they'll catch me some fish! Keep your fingers crossed for me that the water levels are not too high, because I need a lot of luck this early in the season. 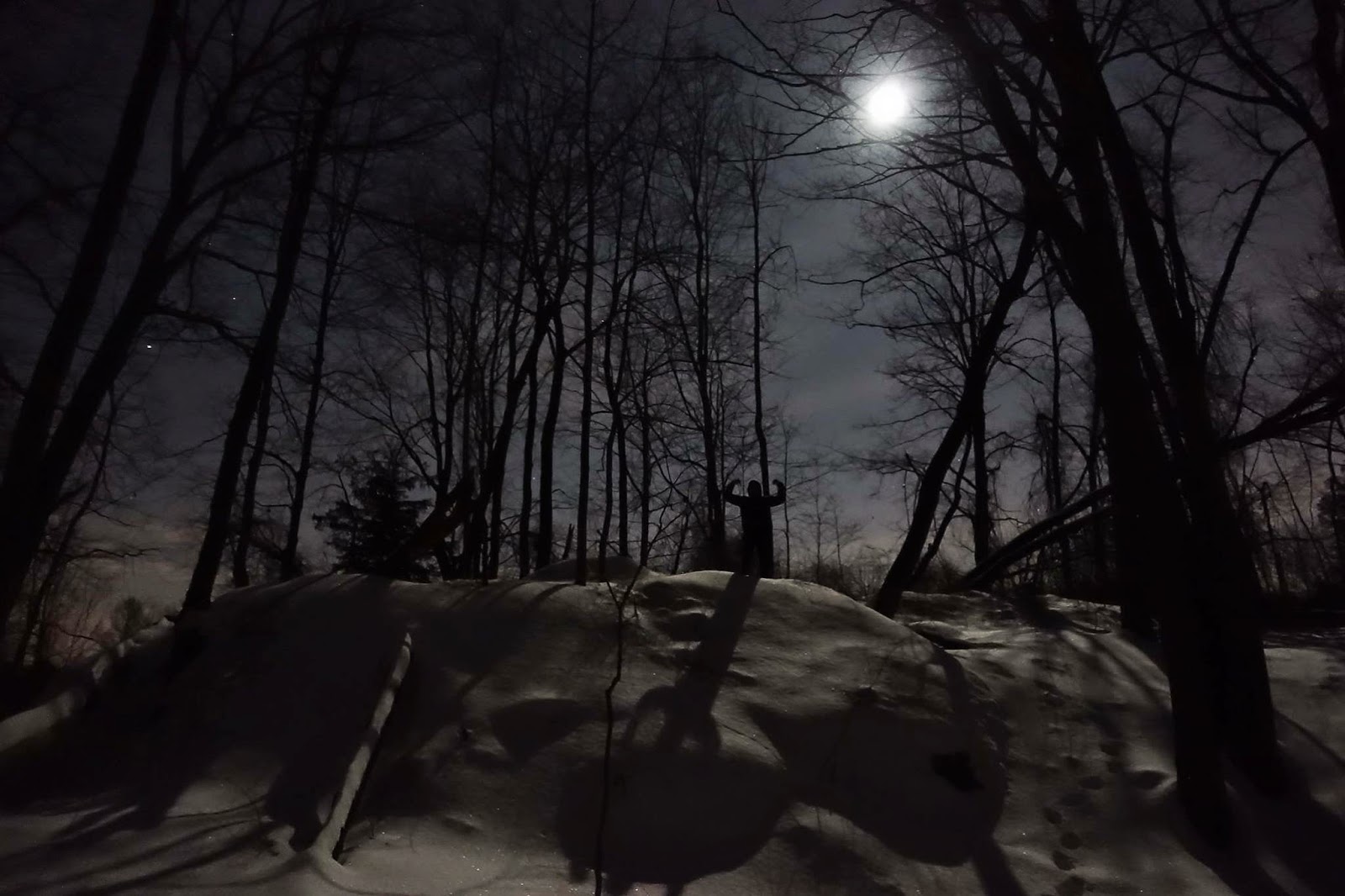 Stay tuned for more when I return from Japan, there will likely be lots more to share!

Well hard work really does pay off sometimes! I've won a work-related trip to Japan, thanks to Vine Connections, one of the premier Sake Importers in the USA. Check out their selections some time! Of course, being a Tenkara angler, this meant I just HAD to arrange some Tenkara fishing for the end of my trip. This of course, will be me: 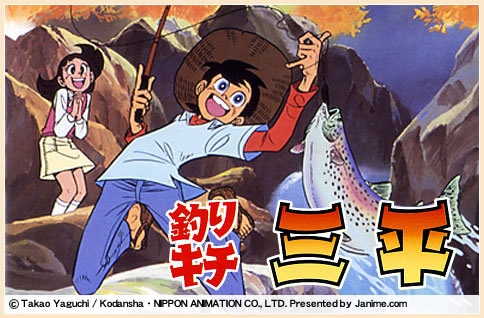 Tsurikichi Sanpei (Fishing Enthusiast Sanpei) is a Manga about fishing and mountain life in Japan - which is exactly what I'll be participating in! Meanwhile, back in real life, I've been connected with Go Ishii in Japan, who is helping me arrange everything. And I couldn't be more thankful! If you have time, check out this link to an interview of Go Ishii by Adam Trahan, of Tenkara-fisher.com
http://www.tenkara-fisher.com/content.php?208-Interview-with-Go-Ishii

In preparation, I've been reviewing soft hackle wet-flies, and specifically the Japanese Sakasa Kebari. A Kebari is the Japanese version of a North Country soft hackle fly. Or should I say it the other way around?? The North Country spiders and similar soft hackle patterns are generally minimalist flies. Here's an example called "February Red" tied by Alan Petrucci of the Small Stream Reflections Blog. Check out the links section to the right if you'd like to visit his blog!
Now take the hackle and reverse it forward... and you've got a Kebari!

One major benefit of the Kebari is the way the forward-facing hackle can be "pulsed" or manipulated in the water to create a very buggy-looking presentation. I found a great video posted by Jason Klass on youtube that shows one in action! Link here:

https://www.youtube.com/watch?v=_Cflrh-c7eM
As I began tying some of my own Kebaris, I reached out to Kiwi, who ties for the Tenkarabum.com store - he pointed me in the right direction. Luckily I had purchased a few Kebaris from him previously that I could use as examples. There are a lot of patterns to check out on his blog, and I included a few examples, below.


I also reached out to Chris of Tenkarabum to order one of his "one fly tying kits" for the Takayama Sakasa Kebari to get myself started. This is particularly awesome because I'll be fishing in Takayama. I received my Kebari tying kit in 2 days and got right to tying. My first flies were not as amazing as Kiwi's flies, but as he's rightfully pointed out to me before, sloppy flies catch fish! I tied some with the materials from Chris' kit and some with materials from my existing stash: 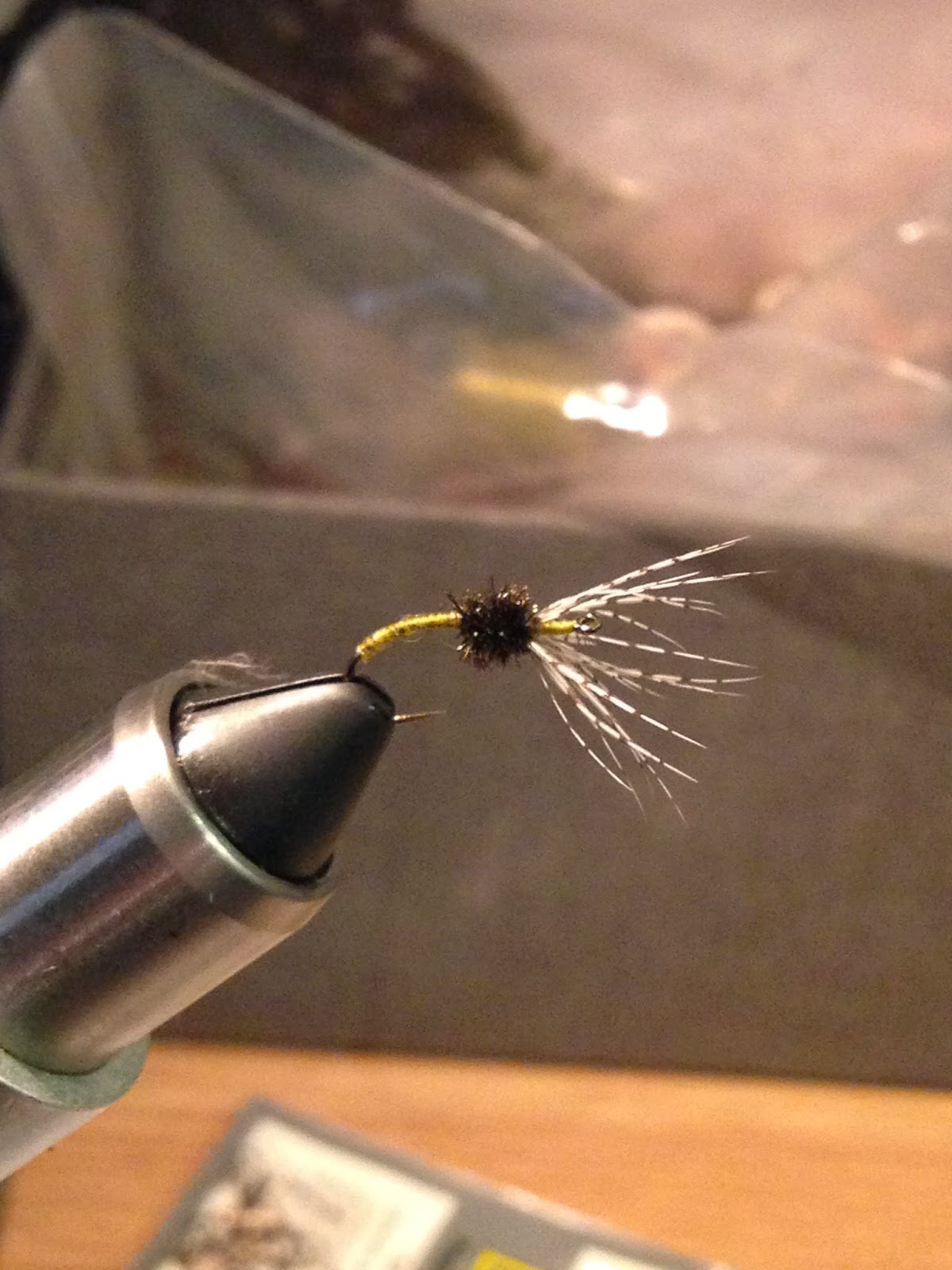 I started with some Danville's waxed thread and partridge. 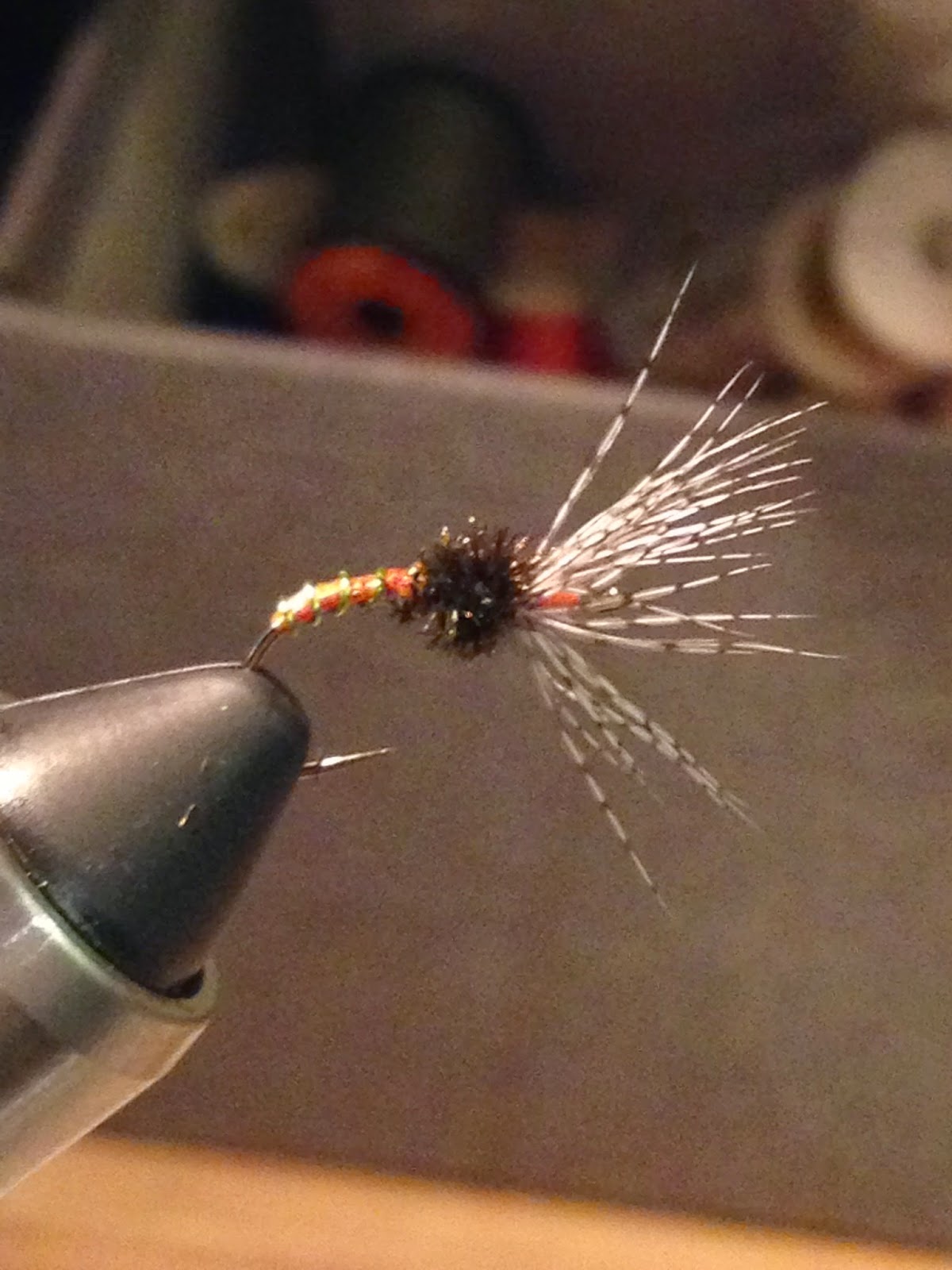 Bright orange catches the attention of the Brookies in the Adirondacks... will it work in Japan? 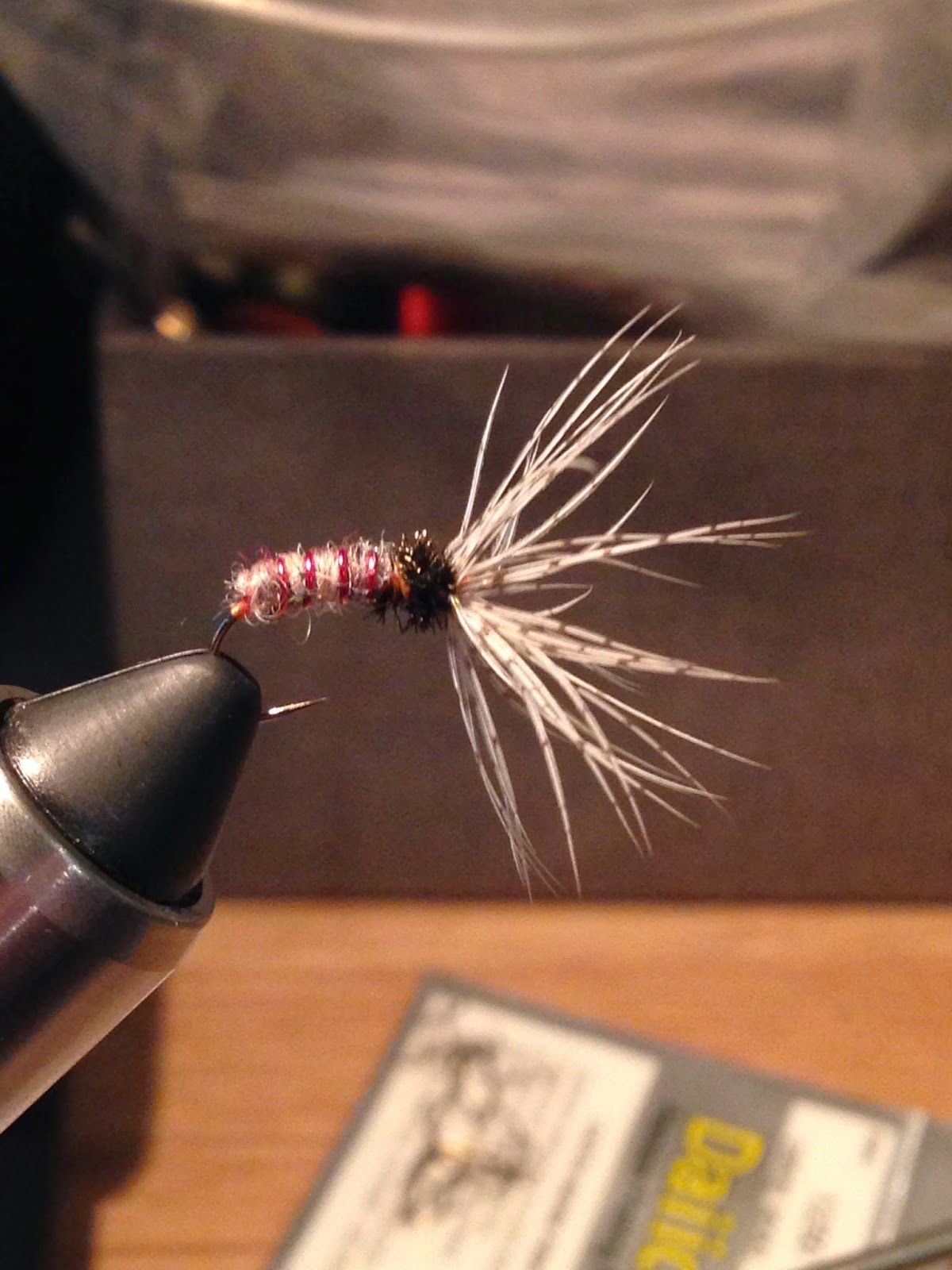 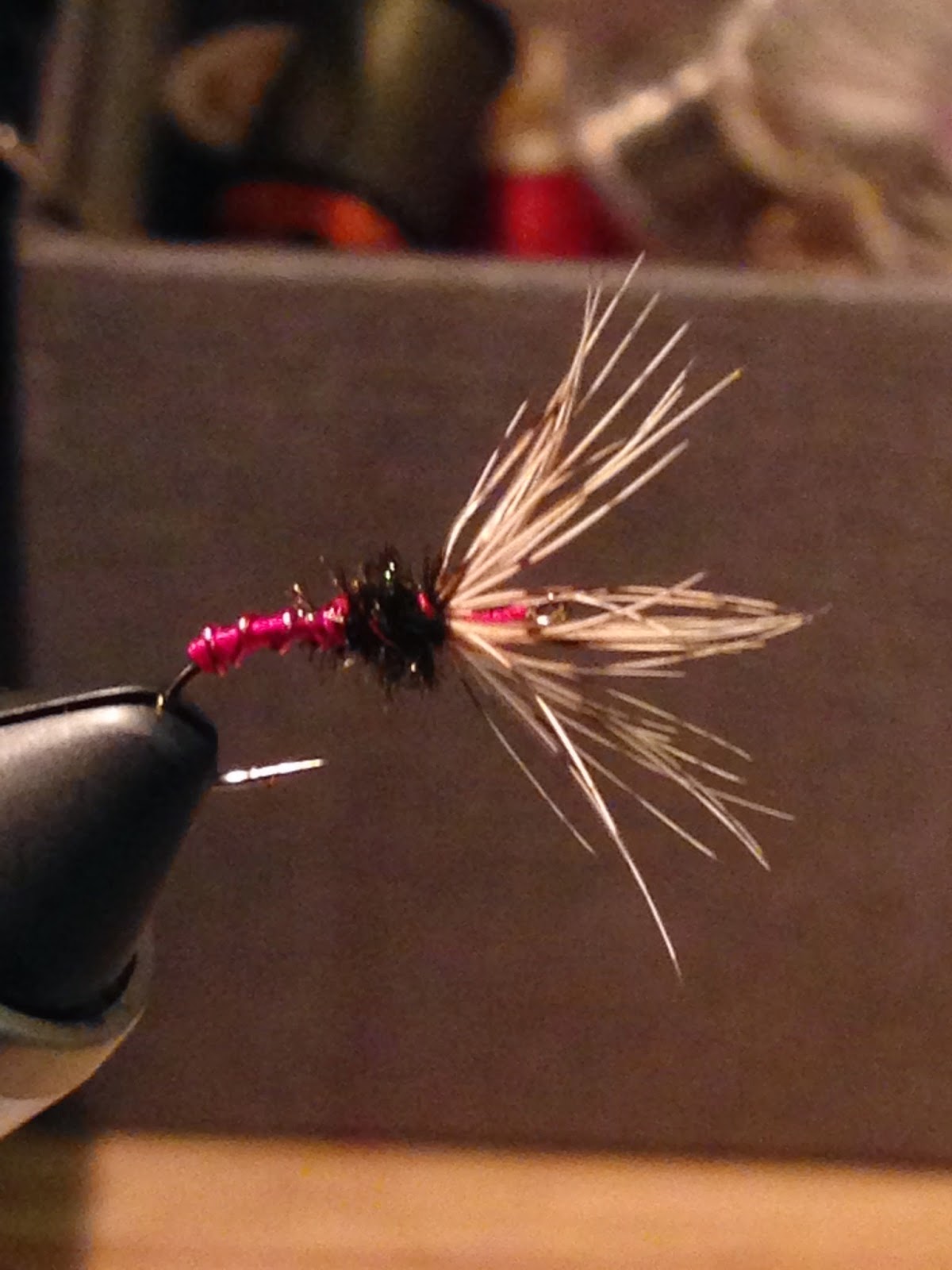 
I know the wire wrap isn't "traditional" with the Sakasa Kebaris. From what I've read, the key is to use the water features to sink the fly down and present it as nature would. Brilliant. However, I'll definitely be fishing very early season, and any advantage to get some faster sinking action seems appropriate, so I added the wire wraps.

I encourage you to tie some of your own Sakasa Kebari flies and fish them this season. While you're at it, won't you wish me some luck in catching these insanely beautiful wild trout that call Japan home?