A Monumental Mid-Winter's Day in a Deep, Dark Ravine 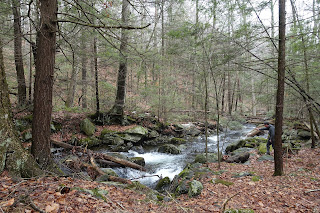 I wanted to put all that solidly behind me, and so I set out to a tried and true stream that I have not had much time to explore in the past. I've fished it a couple of times previously, but both times I had arrived late, and had not made it past a particular pool and slot canyon. I picked up a fishing companion on the way, and we arrived at the stream before 11AM. 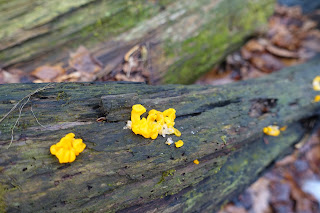 The first hour flew by, and we moved a little too slowly and didn't really get into our respective grooves right away. It was just nice to be in the forest, away from civilization, and beyond the reaches of political concerns or crowds of people. 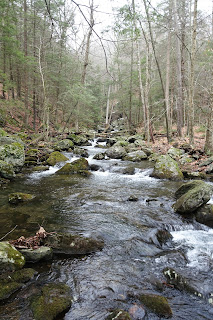 This particular stream is a textbook Tenkara small-stream. It seems to hold its water better than many of the surrounding thin blue lines, and what incredible water it is! Speaking of which, I was EXTREMELY excited that water levels were higher than usual... it was a very welcome sight to say the least. It gave me confidence, and returned the pure bliss that I seek recreationally via fishing, but which I had temporarily lost during the recent drought. 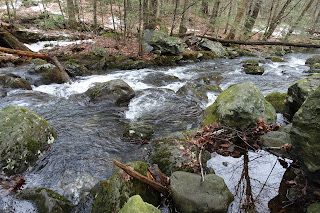 We picked pockets, but ended up focusing on the deeper waterfall pools because the fish were mostly podded up there. I fished a kebari for a while, but after only getting one strike, I decided to change to a bead. 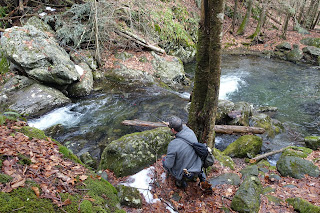 We ended up lobbing beads for most of the day instead of fishing Tenkara-style, because the water was high, freezing cold, and the pools with the fish seemed crazy deep. 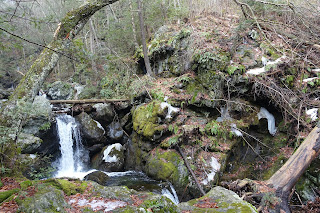 We climbed around a few waterfalls, fishing our way up through postcard-worthy scenery, hooking many small wild trout and hoping for some bigger fish to emerge from the depths. 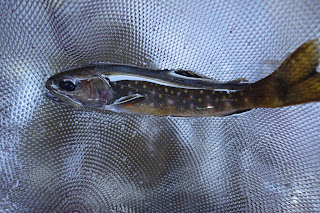 While the scenery was absolutely top notch, it was all about this wild, local strain of Brookies that has survived  here. 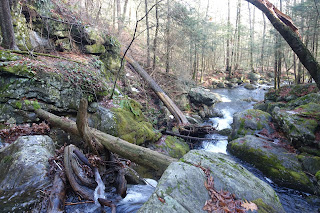 We fished many pools before coming to the start of a set of mini slot-canyons, where the ravine walls turned to vertical cliffs and waterfalls without even a skinny ledge on which to walk precariously... 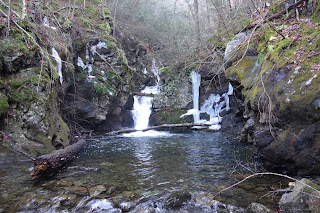 We decided we'd hike up and around, knowing that it wouldn't be a quick jaunt. We began to scramble our way up one of the few navigable routes to the top of the cliffs. 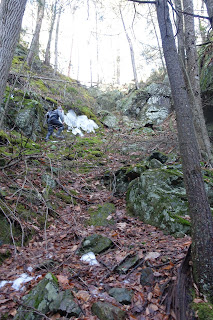 It was hard work, rather vertical, and it wasn't made any easier by my felt soled boots. I hadn't planned on a steep climb up a leafy & half-frozen landscape, and I had to be really careful with each step to avoid disaster going up, and later, coming down. 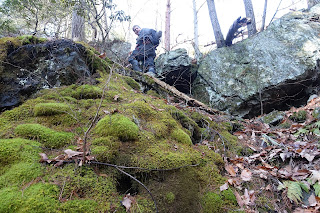 But I wasn't worried about this today, I was just soaking it all in... 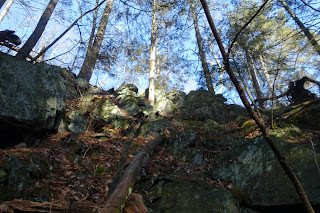 Below are some of what appeared to be wood-ear mushrooms growing on a fallen, lichen-covered stick. 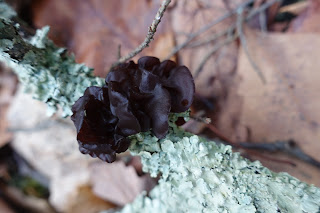 We took a break for lunch at one of the few nice viewpoints we found near the edge of the cliffs. I remarked how it was a good call that we had chosen the side of the river we were on... we could see across the way to a much higher mountain or hill than the one we were about to peak, with much steeper climbs in both directions. 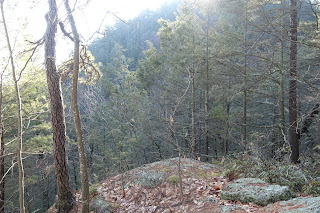 Bushwhacking up further, we followed a mix of game-trails and clearings in the underbrush until we reached the peak, and the junction with another existing trail. At this point we were pretty beat, but committed to finding access to the stream once again. A quick look at the map showed we were almost there and that the existing trail would cross the stream again in about a half a mile or less. 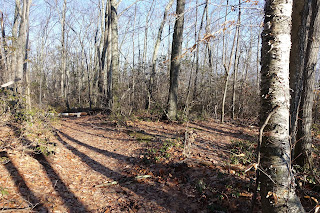 After a short jaunt on the trail, we dropped back down and intersected the stream above the seemingly endless set of impassable waterfalls. The fishing seemed much better in terms of numbers up there, as most likely very few anglers would put the necessary effort into getting to some of the nicer pools higher up. 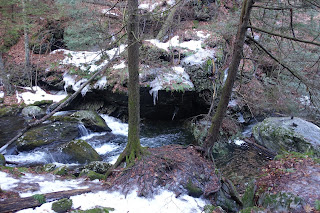 Up here the ravine was truly devoid of sun all day at this time of year. There was a decent amount of seep-ice, but it was actually beginning to melt in the warmth of the day, sunlight or not. I knew the ice melt was contributing to lower water temps, which would likely contribute to less active feeding, but with good deep drifts, fish were taking the fly. 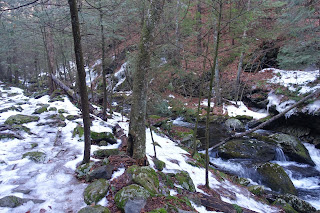 This is the first time I've busted out bead heads for any significant stretch of water in months, if not the entire year. At first I was reluctant because I've had so much success all year fishing Japanese style Tenkara the way it was intended. However, there are times when you know you must give up on your own set limitations or alter your style if you want to have a successful day of fishing. 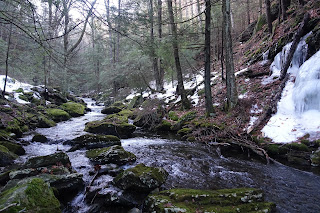 That move proved rather fruitful as I began to get more and more strikes. In a way, I felt like I was admitting defeat. In another way, I knew I was doing what was necessary to catch fish. I guess this is a good moment to make a pun about a "catch 22?" 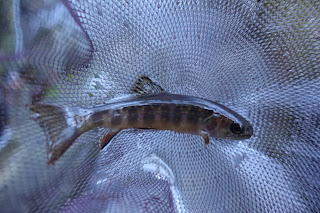 While I had been less than stellar at fishing the lower section, I was truly on point in the upper section of the stream. For some reason I was more focused and had a better rhythm. By that time I had also figured out exactly where the fish were hanging out - mostly in calmer water under overhangs. 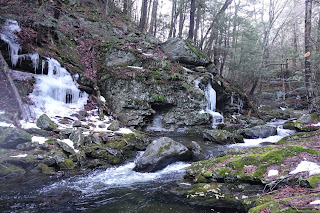 Many more fish began to come to hand, and the colors were phenomenal. All of the fish were rather small, but there seemed to be plenty of them. Most of these fish were darker, and it made sense given how little sun made it to the stream-bed this time of year. I presume in the summer some sections get decent sun, but the walls are ridiculously steep, so its all about the orientation of the ravine walls to the sun's path. 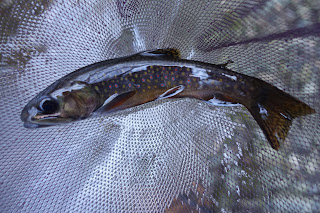 Unfortunately all the bushwhacking and hiking took a while, and so we began to run out of light just as we had once again both settled into a successful rhythm. I actually really regretted not having backpacking gear, and I know I'll need to return to this upper section of stream in the future with an overnight stay planned into the trip. 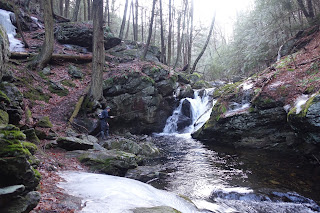 We were pretty far into the forest, with significant difficult and slightly treacherous bushwhacking required to get back, so we watched the time carefully. 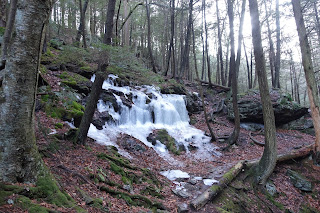 Reluctantly, as the pre-set turn-around time came and went, we finally agreed to head back down the icy trail and to the junction with our game trail. From there we were able to retrace our steps by tracking our own disturbances/footprints and broken branches to a safe enough place to scramble back down and hike out. 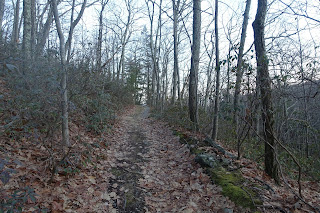 Overall I was extremely happy to have been able to explore the upper section of this epic stream, and it was great to have a "many day" as well. All I could think about while walking out was returning here with climbing ropes and ascenders in order to access some of those amazing waterfall pools in the middle of the ravine. I would like to see if I can channel the methods and practices of Yuzo Sebata that I marveled at in Japan, albeit with a little bit more modern gear. Surely nobody has ever fished some of those pools, and the idea of 16-18 inch wild brookies in untouched waters excites me more than any fish I see in front of me ever can...