The Last Day in the Headwaters for 2018

Last year was not a great fishing season in Colorado. We had a really low snowpack for the winter of 2017/18 and there was little rain, as usual, after that. I didn't spend a lot of time in the headwaters in the summer of 2018, but one of the most memorable trips was the last trip of the season for me... 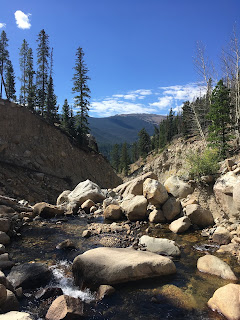 I drove up to the headwaters to catch a window of nice weather right before the first predicted snow of the season in late September or early October. I had just been visited by my parents, and then recovered from a cold after that, so I was eager to get into the headwaters and just "let go." 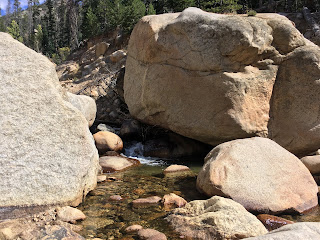 Being in this kind of wilderness is regenerative... it re-charges my soul and makes me feel completely alive. The warmth of the sun, the gentle wind and the colors of fall had me swooning over this spot that I hand't fished in a few years. Its a particularly delicate headwaters that holds Greenback Cutthroat and isn't all that easy to access if you don't like ultra-steep banks and boulder-climbing. 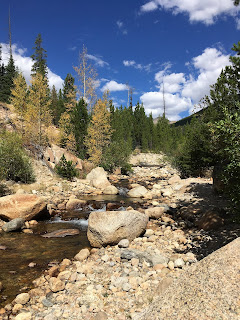 But all that scrambling and sliding pays off nicely as the native residents are seemingly always hungry... 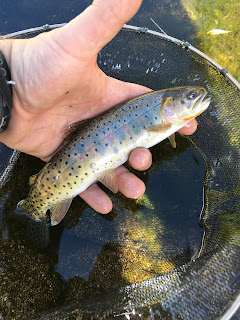 I love fall in the mountains here - the days can still be very warm, but you feel the cold wind of winter creeping up.  The aspens turn yellow and orange, juxtaposed against the deep-green of the evergreens... there is a certain feeling of summer's content lingering, yet also a hint of the lonely winter-longing that you know is coming soon. 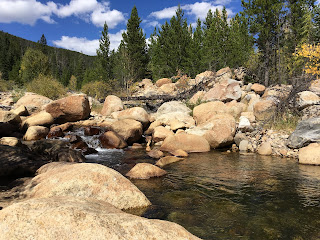 This particular headwaters is quite well suited for Tenkara fishing in most places, but there are some extremely tight sections of willows and messy overgrown brush that is best just to ignore and walk around. Fishing through these sections can be more annoying and time-consuming than its worth, so I usually hike around them. 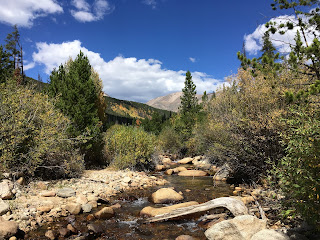 The greenbacks in this stream are just so beautiful and vibrant... a lot of orange and some pink hues can be found, and they were shimmering brightly in the mid-day sun. The fish are generally not very big in this stream as it is small and has been flood-damaged many times over. 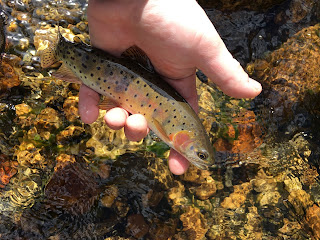 I spent the entire day walking up these headwaters, and the fishing was actually extremely difficult on this particular day. Morning yielded only a few, but as the sun warmed the water up, the fish became much more active. I also discovered later that I was just days behind a group of other Tenkara anglers who had also pulled countless fish out of the stream so I know it had been hit hard that particular week. 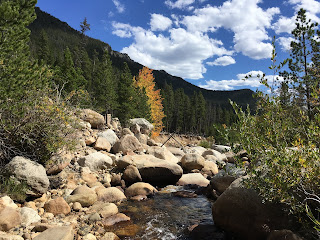 Nonetheless, I managed at least 25 to hand on this day, a respectable number if not a bit low for my average on this kind of headwaters. I never obsess over numbers, and frankly its hard to keep track after 20 anyway! 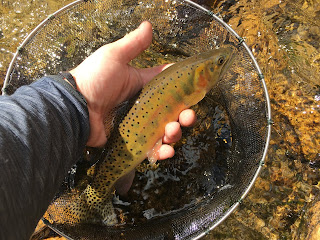 Up in those high peaks behind the evergreen forest lie the lakes which feed this river... the peaks above them would normally still have snow on top, feeding them fresh melt-water, but this year that snow had melted months before, resulting in very low water all season. 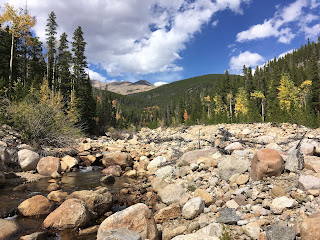 If you can book the campsites early enough in the year, there is some great camping along those high mountain lakes... but good luck getting a reservation for a campsite up there on a weekend! 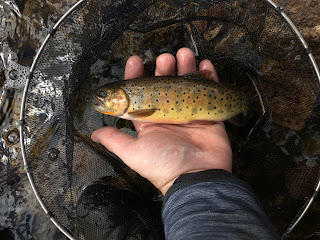 I also like to carry a nice piece of glass with me on all my fishing journeys. Cannabis is a huge part of the outdoor experience for many, connecting us even deeper with the flow of the universe and the wilderness around us. I find it acts as a "crutch" to help undo certain negative daily societal patterns and jolt me back into the natural flow of the natural world around me. I always sacrifice a small prime bud to the river during my first sesh of the day as some kind of odd ritual... do you have any odd rituals you partake in while fishing? 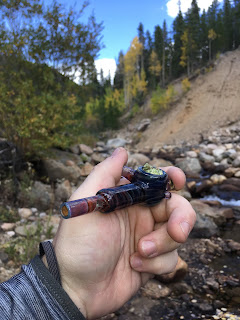 I enjoyed some Lemon Heads (Lemon G x Face-Off OG BX1) and then took a lunch break. I watched a nice cutthroat trout feed in the run above me while eating my sandwich, and then when I was finished, I packed up and caught that fish, pictured below. 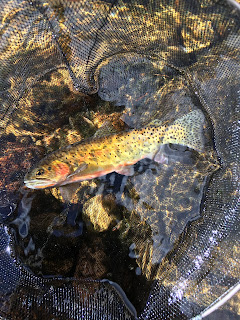 You can see from these photos just how low the water was... luckily it was cold and the fish were looking healthy even though it was not an easy season for survival on their behalf. 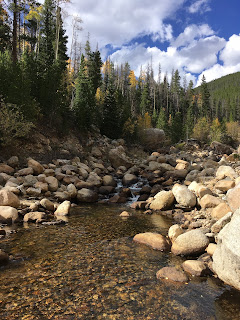 I love when the parr marks remain longer than usual. This fish had such beautiful orange cheeks and dark parr marks, it really stood out to me. 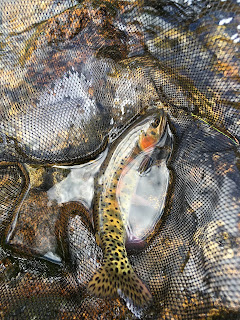 But above that run was another even more beautiful plunge pool. I stayed low and cast from far back, grabbing another beautiful native resident... 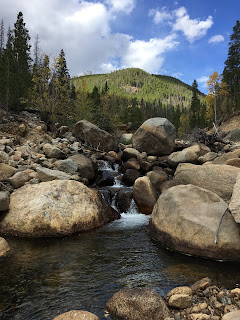 ... which had completely different markings and no parr marks left whatsoever. 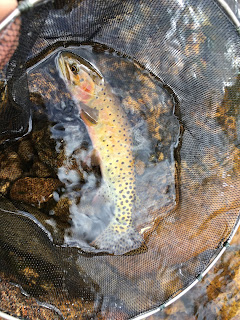 I had time for a few last pools before I had to hike back to the car, and I took my time enjoying every cast. 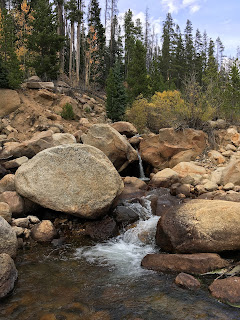 This last fish of the day was a solid example of a native trout for this river... layers and layers of color, just the right amount of spotting, and an ultra-vibrant slash of orange lending this fish its name. 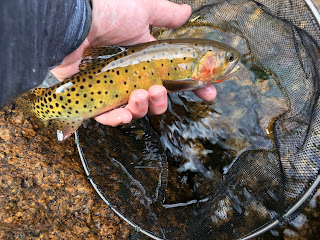 I scrambled up the banks and took a few moments to soak in the beauty of the late afternoon light on the trees. I was beat from a rough day, but the world around me lit me up inside and gave me a second wind almost right away. 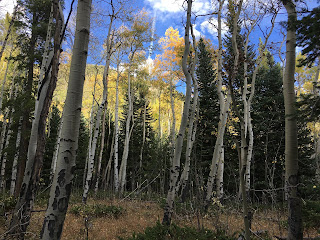 As I walked back towards the trail I noted to myself the amount of flood damage this area has had over time... yet the ecosystem still survives. 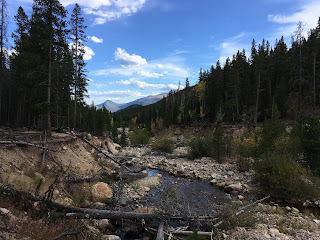 There was such a sense of chaos looking out over the river... something about the massive erosion damage and the Aspens looking like they were on fire just hit me hard, but not in a bad way. Nature is powerful. 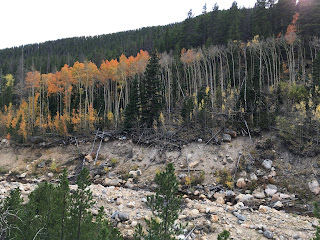 Looking east back towards the trailhead: 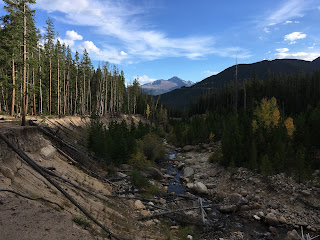 I walked down the trail back towards the car, knowing this would likely be the last chance I had to fish the headwaters before the snow came ... but it was not bittersweet. I was already looking ahead to the potential of a snowier next winter, a rainier next spring, and another year with more water and better fishing soon to come. 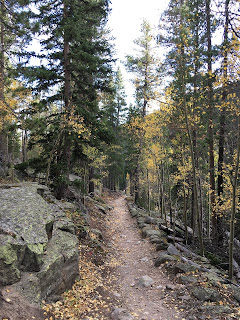 The sun setting over the mountains to the west gave me one last gift of natural beauty before disappearing. The cold began to fall on the mountainside, and I doubled my pace back to the car to keep warm. I knew memories of this day would linger and I began to plan my adventures for headwaters season 2019... 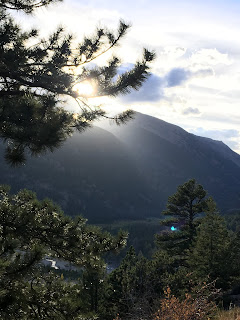 See you out on the water soon!